Heidi Angell is a prolific writer, with several series already under her belt, and a number of projects on the go at any one time.  There is something for almost every reader of the paranormal in her collection, from the “Clear Angel Chronicles” (a paranormal detective series) to “The Hunters” (straight up urban fantasy).

I caught up with Heidi, by email, during a very busy time for her. But she was kind enough to take some time out from preparing for an upcoming release, and answer some questions. So without making you wait any longer, I’ll hand off to Heidi…

Heidi Angell is a bibliophile, lexicomaniac and wordsmith! She is the author of The Hunters Series, The Clear Angel Chronicles, and The Hell School Series. She also created Royal Prince Vince, and Creative Exercises to Inspire.

When she is not reading and writing, she can be found spending quality time with her lovely family camping, hiking, swimming, or watching movies.

Why don’t you begin by sharing a little about yourself.

I am a pretty eclectic person. I like a lot of different types of books, movies, music, subjects and even types of pets. I like what I like and sometimes (without meaning to) I can let my opinion railroad other people. I really don’t mean to. I walk a very fine line between being assertive and aggressive. I am also a very direct person and if I hurt people’s feelings I want them to let me know because nine times out of ten, I didn’t mean to hurt your feelings.

Could you tell us a bit about your latest book?

I am avidly working on the second book in The Hunters series, which is about a group of vampire hunters. In The Hunted (tenatively slated for release in September) We follow Fury, Havoc and Screvin as they track down the Werewolf who turned Screvin and try to help her come to terms with what she is. But then the Counsel comes after them. Now the hunters have become the Hunted.

Who is your intended readership?

Everyone who loves strong female characters, and who believe that vampires should be killed, not kissed.

When did you realize you wanted to be a writer?

I get asked this one all the time! I have always been a story teller, even when I was too small to remember. I began writing stories in earnest after my first grade teacher had us “publish” a book to teach us the different parts of books. I was bit. I dabble in other forms of story telling, such as acting, poetry and music, but writing always brings me back.

Do you have a favorite author, or writing inspiration?

So very, very, very many! I love prolific authors such as Clive Cussler, Shakespeare, Sue Grafton, Alexander Dumas, and am trying my darnedest to follow in their footsteps.

What advice would you give beginning writers?

Focus on writing. Join critique groups, share your work, hone your craft. Write every day. That is what writing is really all about. Don’t let yourself get lost in all the rest of the mess.

What do you like to do when you’re not writing? Any hobbies?

Reading, of course 😉 I also love to swim, hike, binge-watch TV and movies, and do as much of that as possible with the fam.

What’s your next project? Any upcoming book secrets you care to reveal?

Ha ha, well that is a magical question! I am actually letting people vote on what project I tackle after The Hunted.

Heidi Angell is asking readers to pick her next project!

With a number of potential projects in the pipeline, Heidi is asking for readers to vote on what they would like to see next.

Take a few moments to check out her list, and pick the project that gets you the most excited. 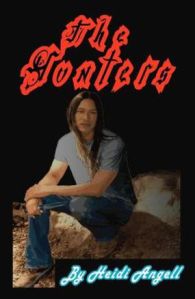 What would you do if you found your town had been infested with vampires? For Chris and his brother Lucas, the answer was simple enough: you fight back. Gathering a small band of other people in their town who have been affected by the vampires, they begin a resistance. But after a year of fighting, they have only managed to kill a handful, while the vampire leader has turned five times that many.

Fury and Havoc. They call themselves hunters, and want no part in this little band of heroes. Ordering them to lay low, the duo vow to rid their town of vampires. When Fury is injured, Chris aides these strangers, entwining his future with theirs.

Now that the vampires know the hunters are here, and that Chris and his friends have helped them, the group is in more danger than ever before. Lucas is torn between protecting his new family from the vampires, and protecting them from these seemingly inhuman beings who say they are there to help.

After all, what beings could be so powerful as to scare a vampire?

You can purchase from most major retailers, on Smashwords in any e-book format, or follow the link for the paperback.

#1 : Elements of a Broken Mind

Grant Anderson is a small-town detective whose job was quiet and easy, until three girls end up dead. A serial killer is stalking the young ladies in his town. Without the high tech equipment of big cities at his fingers, Grant must rely on good old-fashioned police work; but with no discernible pattern and no clues to follow, the case seems to be grinding to a halt.

Then Grant gets a visit from a mysterious young woman. Who is Clear Angel? What is her connection to the case? If Grant is to believer her, then he must accept that she has “seen” these things. But Grant is a professional. He cannot believe in psychics! Yet when another girl goes missing, and Grant’s search is yielding nothing he is desperate enough to try.

Clear Angel has always been special. Seclusion has kept the nightmares at bay. Then the nightmares begin again. Are they premonitions of events to come? Are they the sick fantasies of a madman?

Then one evening she runs into a stranger and finds out that not only are they real, but they are happening here in her home town. After a lifetime of running and hiding from what she can do, she is now forced to reach out to the most unlikely person in an effort to save innocent girls and perhaps the world.

Grant and Clear team up to stop a madman bent on the destruction of the world. As their feelings for one another grow, they try to deny them. But when Clear goes missing, Grant must face his feelings and save her before it is too late.

You can purchase from most major retailers, from Smashwords for all e-reader styles, or follow the link on Smashwords to purchase in paperback.

Psychic Clear Angel hasn’t seen or heard from her one-time lover Detective Grant Anderson since their first case wrapped up six months ago, and that is perfectly fine with her! But when he shows up on her porch in the rain and in tears, she cannot hold her ground. No matter how she feels about Grant and her “gift”, she can’t ignore the visions already pouring in.

Grant knows that he is no good for Clear, and has respected the distance she has kept. But when his daughter goes missing and the Chicago police have no leads, he turns to Clear and her unique abilities.

This next adventure puts Grant and Clear in close quarters as they find themselves once again fighting their feelings for one another. Thrust into the dark underworld of performance art, they strive to track down a ballerina who keeps taunting Clear in her visions. As they delve deeper into one studio, the grisly visions that haunt Clear may be more than she can handle. Can Clear hold it together to help find Grant’s daughter before it is too late?

Available at most major retailers, from Smashwords to choose your preferred e-book style, or follow the link to buy the paperback.

Where to find Heidi Angell:

This site uses Akismet to reduce spam. Learn how your comment data is processed.